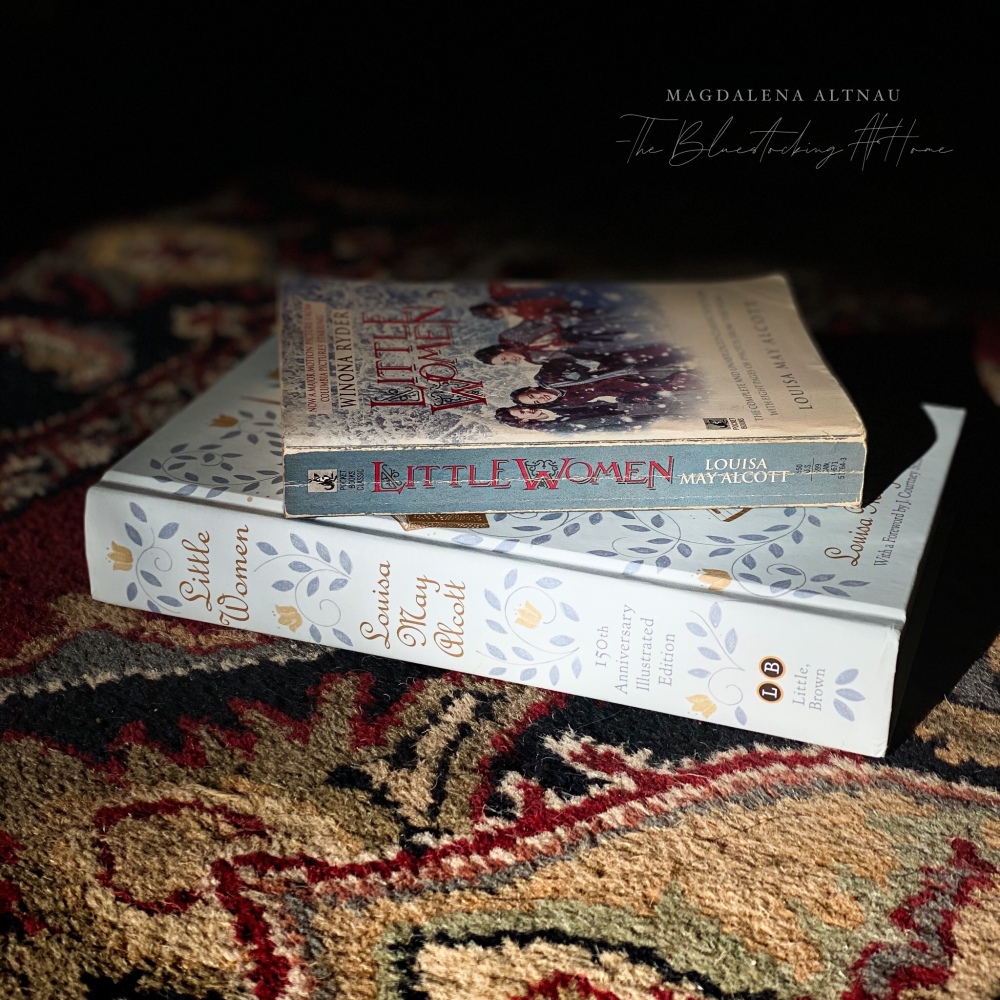 I had just turned 15 in 1994 when the Winona Ryder/Susan Sarandon version of Little Women came out in theaters. My mom, sister, and I piled into the movie theater and from the opening notes, of what to this day, 25 years later, is one of my favourite soundtracks of all time, we were sucked in and lost within the beauty of this classic tale by Louisa May Alcott.

In truth, I was desperately trying to finish reading Alcott’s timeless classic, but I didn’t make it time before our viewing, and so I didn’t know entirely what was going to become of our beloved March girls, but it didn’t matter. The story telling and the cinematography were wonderful, and I saw parts of myself in each of the sisters. I left the theater wiping away tears that flowed out of every emotion, finished the book, and have cherished the characters and the story for the last 25 years.

Yesterday, I took my own daughter, along with my mother-in-law, to see the newest version of the film, and I wish I had the same elated feelings and felt the same connection to these characters and their stories as I did then, but I don’t. In fact, the more I reflect on it, the more disappointed I am in how this version turned out.

And before you think I’m some purist who doesn’t like remakes or demands that films be carbon copies of their original books, I am not. I love a good remake. I am extremely forgiving in this department and I love to see old stories told in new ways. And I really wanted this version to be a new favourite.

But this 2019 Greta Gerwig version, in its effort to push the story of Little Women into a new dimension, has left us with a very disjointed story that lacks the depth that I so wish it could have had.

The storyline is not chronological and from the very first scene to the last feels disjointed and choppy. I love artsy films and I don’t mind cinematography that challenges the viewer, but in this case it falls short in some crucial ways. First and foremost, for an audience who might not be at all familiar with the story of the March family these short and abrupt scenes that jump back and forth from present to past and everywhere in between don’t really give the viewer an opportunity to understand the story in its fullness. Since the last movie that reflected the story in its own time period (not the retelling of it in a modern setting as the 2018 version) was released in 1994, it would be fair to assume that for many young teenage girls and even young adults this could be their first experience with Little Women and I think that it might not capture their hearts in the same way as a chronological telling of the story.

But perhaps the biggest consequence of this jumping timeline, was that I felt that it didn’t showcase the depth of the relationships formed between the characters. The film “told” me that they existed, but it didn’t “show” me in a way that felt convincing. Because I know and love these characters, I can fill in the holes, but I’m not sure that someone who has never seen it would be as won over or moved by the relationships as they are presented. So many of the scenes seem abrupt, disconnected from the larger story, and it feels as though many pieces are missing.

In this format, the character and personality of each sister, of the March family as a whole and individually, of their ideals and values, are reduced to mere snippets of loosely tossed information, when in reality, these are the very fibers of what made Alcott’s story so compelling. The sacrifices made for the ideals that were held by this family, the way that it positioned them amongst their peers and in their community, these are all vital to the paths and decisions that are made by each character in this story. And so Gerwig’s jumping around only infers that these aspects exist but not that they are the glue that binds the story, and the family, and all those come into their lives.

To be fair, I am a fan of the costuming and scenery, and of some of the photography techniques. As far as aesthetics are concerned, I think that the colour palates and mood, lighting, the homes, and settings are all done beautifully.

I wanted to feel that the March sisters were well-chosen for their given roles but I’m not convinced in that department. They seem like a group of girls all the same age for roughly the entirety of the 7+ years that the movie follows. I don’t believe that a 12 year old Amy would look just the same at 19 or 20, I know that I changed much more in those years. I see it now in the young girls I have known and seen grow and mature. And as much as I love Emma Watson as an actress, I felt that she didn’t carry the maturity that Meg has always represented for me. Maturity in being the oldest, in being the first out in society, and somehow understanding those social and political dynamics in a much more profound way than her younger sisters. And yet here, in Watson’s portrayal, I didn’t get that impression from her character at all. Beth and Jo were perhaps played best, though Beth’s character could have been more compelling as well. All of this is a shame, as the actresses are actually fantastic; but once again, perhaps it is more that the format of the short snippets of stories didn’t showcase their characters to their fullest potential.

There is a beautiful scene with Jo and Beth by the ocean, reading and talking, and it is perhaps one of the most evocative showcases of their relationship and its depth and these are the types of scenes that I wish there were more of in this film.

But the truth is that the crux of the way that this version of Little Women plays out and is represented is something even deeper than the plot structure or the age of the characters. I am not against new artistic styles, I am not against inviting the audience to become more deeply invested in who these character were or could have been. The inference of other struggles, societal, personal, or both, have their place. But what I dislike, despite the new trend that I have seen in more than one remake, is the modern retelling of old stories, set in their original time, but with today’s modern sensibilities layered over them so as to suit our own current ideals. Layered in often less than subtle and unfortunately, often disingenuous ways.

While I appreciated some of the bolder and even blunt observations about women and their struggles, their position in society, their relationship with money, and the ability to quite literally “own” the stories of their lives, I worry that sometimes we are too eager to swing the history of those characters into our own court and current discourse, standards, and views.

Jo March, Marmee, and in fact, the entire March family are already incredibly progressive for their time. They are already challenging and standing up to the deeper ills of their society. These are incredible and profoundly strong women, even the quiet ones, even the ones marrying and having children, even the old spinsters. These women are, as Gerwig has emphasized (with Jo decidedly and firmly choosing to own the copyrights to her story despite having her hand forced where the the ending was concerned) brave enough to choose their own paths. They are choosing their own paths, both in the face of outside pressures, and their own family dynamics. Each one sets an example of how to choose for yourself the life that can offer both contentment and joy, even in the midst of the hardships.

I worry that sometimes we want to take these beloved characters and rush them to the finish line of a history that we ourselves are still muddling our way through. We want them to be as bold and as “progressive” as we are today. And yet, this actually strips away the journey that women as a whole have been a part of over the course of history. When we seek to rush these women to meet us where we are today, we forget just how bold and courageous they were to take the steps they did in their time to help make a way for us. We don’t need to make them “more” than their own time, because what they did in their own time made it possible for us to be standing where we are today.

Perhaps instead of trying to portray Jo, Meg, Beth, Amy, and Marmee as even more outspoken and bold, we should in fact, heed the advice that Amy gives to Jo towards the end of the film, when Jo is convinced that no one wants to read about of the lives of women, and Amy suggests that this is precisely why someone should write about them.

Women’s lives and women’s stories are interesting, valuable, and noteworthy, not just when they are feminist enough for our modern liking or through our modern lens, but rather purely of their own merit as part of the tapestry of the human experience. Little Women is just as valid a story today as it was over a 150 years ago, with no extra filter or lens. It reflects a moment in history and it honors the long journey that we women have fought to get to where we are today. For that, it deserves to be honored and hailed as a marker in time; as a depiction of visible moments in the thread of our own history, where change and progress and courage are tangible. Especially today, when we can appreciate that journey with hindsight and with greater scope.

I think that Little Women was always a deeply feminist and empowering story because it actually showed us that women could be brave and bring awareness to social issues, fight for good and make a difference, that they could choose different paths in life from one another and still be happy, and that even in the midst of it all, they could grow and change into women who understand themselves more and more with each passing year.

Greta Gerwig’s Little Women is not a flop. It has many beautiful elements and I, like many other that I know, cried at many parts. But I cried and I was moved because it is a story that I already knew well, with characters that I already loved deeply. I think that for some, this retelling will be enough, and that’s completely fine.

I am generally very careful not to critique the creative works of others, because I know myself and recognize how hard it is, and how much courage it takes to create things and to release them into the world. But I also love discourse and dialogue and I am deeply committed to working through thoughts and ideas and challenging myself to question and go deeper in my own thinking and ideals. And because of that, I hope that we can ask ourselves questions about how we retell the stories of the women who came before us. How we sometimes, either consciously or unconsciously, judge them or filter them to fit our own experiences and sensibilities. In a world where women have long fought to simply be enough, can we acknowledge that perhaps we don’t need to go back and make them “better”?